"A Return to Glamour"

I was as amused as Jon Stewart at this year's Oscar theme: "A Return to Glamour."

"What a relief," he said. "After last year's theme of 'sweatpants and jeans' it will be a real treat."

And of course, everyone looked properly gorgeous and well-groomed. If there was a hair out of place, it was put there deliberately by a high-paid stylist who was aware all the other stylists were doing it in the same way. Every gown was tasteful, every tux was pressed.

I did appreciate Charlize Theron's attempt to recapture an "old Hollywood" style with her beehive hairdo and oversized shoulder-bow, but it came off as more of a costume than an homage. But no risks were taken (probably because people are still making fun of Bjork and Cher) and there was little fun to be found. Necklines plunged, but nowhere near as far as J.Lo's did a few years back. Naomi Watts wore a torn-up confection suitable for a gal who's been in the fist of an ape, but even that seemed a little last-year. Or maybe next year? But not this year -- this year was mostly about taffeta. Here we are, it's ot-six, and we're halfway through the decade, when the themes of fashion settle. So what's the 00's style? Maybe it's so settled now I don't even notice it. There was something new: some big-skirted dresses (Sandra Bullock and Amy Adams) had pockets. Who wouldn't want pockets in an evening gown? And there was something missing, too: the rocks. What was that all about? If we're returning to glamour, doesn't that mean a carat or two--or ten? Harry Winston hates a natural beauty.

But look at me complaining. I had a marvelous time, sitting on my couch in my sweatpants (so last year!) eating buttered popcorn -- and the gold-dusted chocolate Oscar from last year's basket, courtesy of my friend Abby Letteri and her Oscar™-winning husband Joe Letteri™, animator of Andy Serkis™, who got the props he deserved but no statues. I sat there appreciating all those beautiful people who worked so hard to get where they are, and then worked so hard to look as good as they did last night. Pedicures, peels, polishes, (I got tired just thinking of it). All just to entertain little old me. 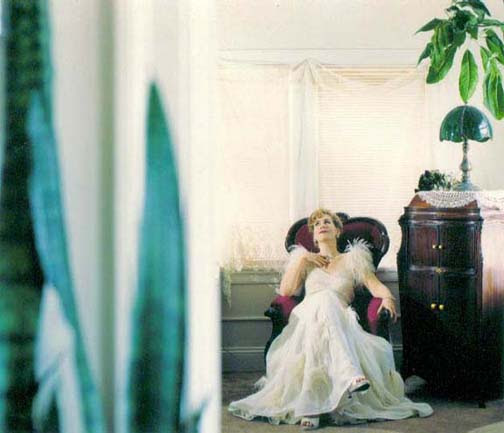 A photographer approached me at a ball and asked if he could photograph me in my home, wearing my gown. He was German, doing a book on Americans and our whimsical ways of costuming. I wish I could remember his name!

Just before the shoot, I decided there should be cherry blossoms in the picture. I went out to pluck a branch from the trees blooming on the street, my high heels giving me the reach I needed.

My neighbor came home at that moment and saw me in my big fluffy dress. He thought I'd finally cracked, running around in the middle of the day, while other people worked for a living, lost to my fantasy life.

The photo has become a favorite of mine, just for this reason. The dress is a Mark Jones reproduction of a Ginger Rogers dance dress. I modeled it a few times in vintage fashion shows, then my husband (my prince) surprised me with it for Christmas one year.

In my dreams I am wearing this dress to the Oscars for a screenplay I've written about Old Hollywood couture.
Posted by Krs10 at 10:47 AM No comments: