Today we got a chance to ride "it’s a small world" in Disneyland, and experience the results of the long awaited—and debated—remodel. I am sorry to report they didn’t update it my way, adding lasers á la Buzz Lightyear’s AstroBlasters. The lasers could be in the shapes of wands, conductor’s batons, whatever—they wouldn’t have to be guns. And every time you hit a singing doll, it would fall silent.

No such luck. The ride is pretty much the same as before. The creepy but oddly comforting sound of doll eyes clicking open and shut can still be heard under the waves of joyful singing that crest and swell from room to room. Adorable multicultural scenes still keep your head turning from right to left like a puppet on a stick. The goat still stands on a hill, the African kewpies still shake their little round booties, the psychedelic hippo still yawns (was that bizarro-jungle always there?) and yes, the can-can dancers are still wearing bloomers.

Other than the new all-plastic boats (sans lasers, alas), specially designed not to sink under the weight of today’s king-sized American families, the only really noticeable difference to riders who haven’t memorized the whole thing, is the addition of familiar faces. Now children can associate the proper cultural or geographical context with their favorite Disney characters, who are all, I am happy to report, crafted in the proper round-headed style of each display. For example, Simba and Pumbaa now pose in the African Veldt. Ariel and Nemo can both be found swimming in the undersea room. Even Lilo and Stitch the alien surf in the island nations.

Oh, and it was probably the simple labor of dusting all 300 of those twisting little heads, but there also seems to be a fresh new coating of magic that ramps up your senses and makes your heart burst with love for all the world’s children. I left the ride unable (and unwilling) to stop singing. I just could have leapt out of the boat and hugged a topiary. Instead I sang, out loud, all the way to Adventureland, with no fear of getting shot.

There's so much that we share/that its time we’re aware/its a small world after all!

Posted by Kristen Caven at 11:57 PM No comments:

I am now embarking on a new phase of writing a musical: the fundraising part! Would you like to patronize me? It's all tax-deductible! 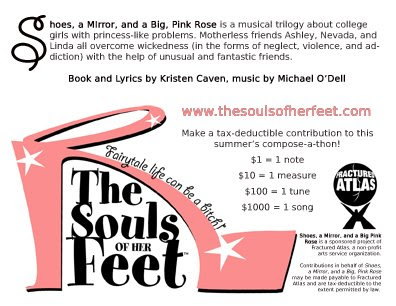 Click here to donate!
Posted by Kristen Caven at 12:38 AM No comments: