What is Wandering Pie?
(note: it's not just a food truck in Nashville.)

I started this blog almost ten years ago when I had something to say about the movies and didn't have anywhere to put it. Since then, I've built an official website, a store, and quite the online empire... but this space has been the place where I can share non-specific thoughts that take more than two sentences of stuff to say.

But I'm notoriously bad at sending stuff out to be properly published, so although blogging scratches half an itch about having a thought "out there" where people can read it, the other half itch so often remains unscratched.

I've gotten better at getting the full feel-good experience of writing, in which it feels good both to write and be read, both with my books and my whatnots. Which...to my relief and delight, people seem to like! My friends send me emails and tell me! And the first time a stranger wrote me it was aMAZING—though I can still count those comments on two hands, and I still itch for more actual reviews. But who reads a blog? And I've got so many. I do promote some of my more topical blogs like The Zorgos Reader. One time I wrote a post about attention on Life in the Fast Brain that was shared/recommended like, 1000 times! Woot!

But with Wandering Pie, I can't really expect a loyal readership, since I blog so very, very occasionally. The counter says it's had two million hits, but the lack of comments tells me they are probably from spiders, and those machines that quote part of a paragraph to make it sound like there is an interesting thought in the "content" of their site that secretly wants to steal your good life.

Anywho, enough about me. I know this guy who blogs regularly, daily in fact, with no need for recognition or payment, but just to journal, to ponder and think things through, and to entertain! There's always an interesting insight on some current event, or his own life (in which I am proud to say I am featured often). He has a readership of about nine, and he's happy with that. Just before mother's day, half of us took him to dinner to celebrate his tenth year of pushing into our lives and telling us his thoughts, ranging from boring (when they are about his sports team for the tenth time that month) to fascinating (when they are about us).

But I am bursting with excitement. The author of Entropical Paradise, who is indeed the aforementioned husband of mine, was identified by researchers as being what they call a megablogger. He too, has written for nine years... but he, unlike me, writes consistently. Which, to me, queen of every-which-way, is incredible.

Here's what else is incredible. He is a person who loves loves loves movies, and has always secretly (and not so secretly) wanted to work in the biz, either as a critic looking in, or better yet, a creator writing movies. (There are several in a drawer, fyi...) And now something astonishing has happened. He is featured in a movie that is about people like him! Just by doing what he does—head down, noticing the little things, nose, effectively, to the grindstone—he's been "discovered."

You'd think I'd be jealous, since I am constantly promoting myself and feel I have to work my butt off for every $5 book sale, beg my friends for every review and comment, and spend more time marketing myself/building my platform more than actually writing (though it's never quite enough). But I'm not jealous. Dave works hard, and has always been clear that he writes for the joy of it. I am thrilled he gets to share that joy with more friends now.

Read about Friends You Haven't Met Yet. When you meet Dave, you'll love and admire and marvel at him. I sure do.
Posted by Krs10 at 5:57 PM 2 comments:

MAY I serve you some fun-filled COBBLER? 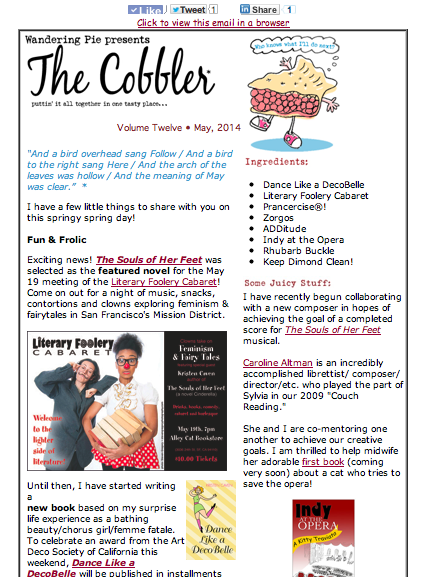 In this fun-filled spring issue, the news was: