I have never been so bad at writing! The sentences that flowed from my fingers on the last day of NaNoWriMo (a long day on a train with the goal of almost 10,000 words) were full of [put something in here later] and mespellngs and Forgetting Where The Story WAs set. But that's kind of the goal of NaNo. To put the editor's mind away for a while (98% impossible when you are, say, ME) and just get the story OUT.

I had planned ahead, literally taking Plan Your Novel at the Barany School of Fiction. So I knew when I got stuck what questions to ask my characters, what details to look for, and I had mapped out the plot so I knew what had to happen in each chapter. But I felt like I was abusing the muse... who always knows just what to day, but takes her time. That's okay, me and my muses get into it a lot.

I got all the way through the last chapter with about 6,000 words to go and sat, stumped, staring out the window, until I thought to go through and look at the musical again. That juiced up another few scenes, and I got to 46,000 words. Then I remembered that the goal is to write 50,000 words in November and I realized how much writing I'd done AROUND the novel. I put my blog posts in, my wild hairs, my Christmas letter... so okay I cheated a little. So when I finished I felt a bit dirty and tired.

But then something magical happened. I was sitting in the Observation Car next to a John Grisham book without a cover, watching the late afternoon scenery go by, when someone came and picked the book up and sat next to me. A reader! A real reader, who takes 20 hour train trips and reads books that are on their last legs and literally lets the signatures fall away, putting this paperback to rest. We started chatting, and when I told him what I'd done, and pulled The Souls of Her Feet out of my backpack, his face lit up and he said he'd HEARD of me, and he'd SEEN this book before! He told me exactly what shelf he'd seen it on (in his mother's retirement home), and complimented the cover. He burst out, "I just met a REAL WRITER!"


Did you hear that? He called me a REAL WRITER! To further enhance my Velveteen Rabbit moment, the two women on my other side both snapped up copies of my book, funding my NaNoWriMo Victory T-Shirt! I read them all some fresh new writing inspired by the golden light on the leaves. We all hardly minded that train was stuck waiting while the tracks cleared for about four hours...!

And when the technical writer who had "discovered" me confessed his longing to write more poetically. I whipped out my pen and drew a "Poetic License" on the back of a handout for my book.


A few days later, I took my teachers, Ezra and Beth, to a NaNoWriMo wrap party in Berkeley. The host wore the celebratory horns, symbol of what I don't know, but pretty triumphant. 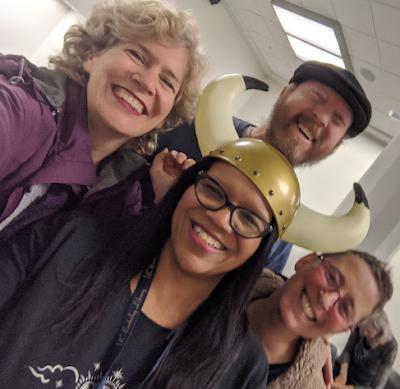 It was rather awe-inspiring to be in a room full of people who had also been through what I had. I couldn't believe some had done this sprint for eight years in a row. I don't know if I ever will, again. We all brainstormed titles for each others' novels and ate pizza.

Until it was time to post another blog, at least!
Posted by Kristen Caven at 2:20 PM No comments: