Mad about the Hatter 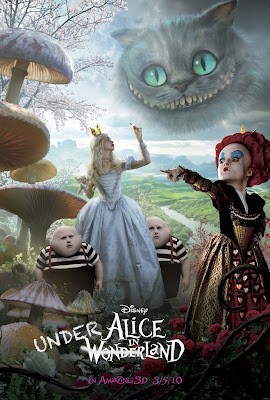 But as it turns out, I love Lewis Carroll even more.

I couldn’t have been more excited to see Burton’s interpretation of Alice in Wonderland. I couldn’t wait to see what sense he would make of the caucus race, the caterpillar, the enigmatic oysters, the meandering logic of Alice’s dream.

But it was no dream he re-created. It was an adventure! It was a re-invention of this favorite tale through his own ego. Imaginitve, yes. Insulting to any English student who studied Jabberwocky or, god forbid, loved the book enough to read the annotated version. Burton admits to reading the book—once, as a child—and not liking it. All of his influences came from pop culture interpretations. (And he must have read the screenplay for 2009’s clever sci-fi tv miniseries, ALICE.)

There are a few repeated lines that work as story themes. One of them is, “Why, my father always said he could imagine six impossible things before breakfast.” (Originally from the stupid White Queen’s mouth in Looking Glass.) Here are six impossible things about his version of the movie
1) Alice did not shun the Bandersnatch. (She tamed it.)
2) The Mad Hatter wasn’t mad, just weird… and political.
3) It is a hero movie with a magic sword and a dragon; not a trial, not a chess game. It is a movie about finding the power to kill when one doesn’t want to. (Huh?)
4) Why no caucus race, kings, or Mock Turtle? Why no sneezing, running to stay in one place, drowning in tears?
5) Why no Bill the Lizard? Why no Lobster Quadrille?
6) And the unforgivable sin: They all called the Jabberwock a Jabberwocky.

Another one of the oft-repeated sentences is, “How is a raven like a writing desk?” The question is not posed as poetic madness, but as a taunt: “are you clever enough to guess?” A yellow-eyed Johnny Depp asks this question over and over, pretending not to know the raven, duh, in this metaphor, is powerful, soaring filmmaker Tim Burton, Poe-loving master of underworlds. The writing desk represents earthbound and ancient Lewis Carroll. Poor crazy pedophiliac mathematician Dodgson. He can’t touch the power of a successful Hollywood career, in which you can do whatever the hell you want. The raven is the writing desk’s manxome foe.

But in spite of the madness (as in, anger) raging in my head as I watched, my eyes were enchanted. In Burton’s fully-realized version, I found much to love:

1) The air-swimming, smoke-like Cheshire Cat, a fully-developed character who turns the tide.
2) Alice’s growing and shrinking dress – a character in itself.
3) Depp’s theatrical delivery of “Jabberwocky” in the golden light of a wet forest to a tiny Alice on his brim.
4) A framing story that brings us a grown-up Alice who has been to Wonderland before.
5) The third repeated sentiment: “You’re bonkers. Gone around the bend. You’re utterly mad…. But all the best people are.”
6) Futterwhacking.

Screenwriter Linda Woolverton admitted, “It will infuriate the purists, but this was never meant to be a remake. This is Alice as a young woman.” Yes, Linda, it infuriated me. BUT you created a marvelous re-invention, and there’s nothing wrong with that, especially where this beloved story is concerned. I blame the Disney exec who okayed, or insisted on, selling it as a remake. He or she should be stuffed into a treacle well.

The Hatter and other characters call the place “Underland,” not Wonderland, which makes perfect sense since it lies, somehow, under this world, accessible by falling a long, long way. Had Disney released the movie as Tim Burton’s Alice in Underland, all departures from the source would be forgiven, even by purists; all creative licenses celebrated. Under a different name I would consider this would be Burton’s best, not his worst. Audiences would have felt the love, not the disdain.